Is a Japanese manga series created by Fujiko F. Fujio which later became an anime series and an Asian franchise. The series is about an earless robotic cat named Doraemon, who travels back in time from the 22nd century to aid a schoolboy, Nobita Nobi.
The series first appeared in December 1969, when it was published simultaneously in six different magazines. In total, 1,344 stories were created in the original series, which are published by Shogakukan under the Tentōmushi ,manga brand, extending to forty-five volumes. The volumes are collected in the Takaoka Central Library in Toyama, Japan, where Fujiko Fujio were born. Viz Media bought the license to the Doraemon manga in the 1990s for an English-language release, but canceled it without explanation before any volumes were released. However, Doraemon: Nobita's Dinosaur 2006 (The 26th film in the franchise) got a private screening in Washington D.C. in November 2008. 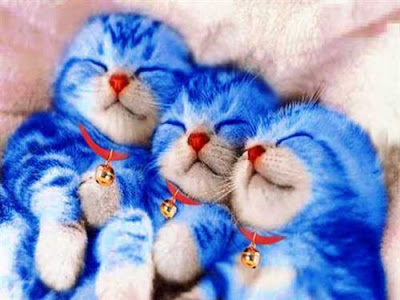 A majority of Doraemon episodes are comedies with lessons regarding values such as integrity, perseverance, courage, family and respect for elders. Several noteworthy environmental issues are often visited, including homeless animals, global warming, endangered species, deforestation, and pollution. Miscellaneous educational topics such as dinosaurs, the flat Earth theory, wormhole traveling, Gulliver's Travels, and the history of Japan are often covered.
Doraemon was awarded the Japan Cartoonists Association Award for excellence in 1973. Doraemon was awarded the first Shogakukan Manga Award for children's manga in 1982.

Doraemon is sent back in time by Nobita Nobi's great-great grandson Sewashi to improve Nobita's circumstances so that his descendants may enjoy a better future. In the original time-line, Nobita experienced nothing but misery and misfortune manifested in the form of poor marks and grades, physical disasters, and bullying throughout his life. This culminates in the burning down of a future business he set up which leaves his family line beset with financial problems. In order to alter history and better the Nobi family's fortunes, Sewashi sent him a robot called Doraemon. 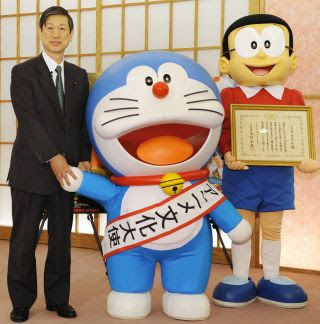 Doraemon has a pocket from which he produces many gadgets, medicines, and tools from the future. The pocket is called yōjigen-pocket (lit. fourth-dimensional pocket). Some of the gadgets (dōgu) are based on real Japanese household devices with fanciful twists, but most are completely science fiction (although some may be based on folklore or religious stories). Thousands of dōgu have been featured in Doraemon. The number of dōgu has been approximated at 4,500. It is this constant variety which makes Doraemon popular even among adult readers/viewers. In the series, the availability of dōgu depends sometimes on the money Doraemon has available, and he often says some dōgu are expensive in the future. The more famous ones include the "bamboo-copter" (very similar to the ones that appears on the older series of Beany and Cecil), a small head accessory that allows flight; the "Anywhere Door", a door that opens up to any place the user wishes; and the "Time Machine". Some of the recurring dōgu appear also in Fujiko F. Fujio's other works such as 21-emon, Kaibutsu-kun, Kiteretsu Daihyakka, Mikio to Mikio or Pāman.

Although he can hear perfectly well, Doraemon has no ears: his robotic ears were eaten by a mouse, giving him a series-long phobia of the creatures.
The only main female character is Shizuka Minamoto (, Minamoto Shizuka?), who serves as a semi-romantic girlfriend of Nobita, but otherwise a supporting, minor character. Nobita's main human friends include Takeshi (sometimes named Jiian in the Indian versions but sometimes his name is mistakenltaken as Takeshi by his mother), a consummate bully and Suneo,a cunning,gloating, spoiled wealthy brat. There are many recurring supporting characters, such as Dekisugi, Nobita's parents, his school teacher, his descendants from the future, and Doraemon's little sister, Dorami.源 静香
The stories are formulaic, usually focused on the everyday struggles of fifth grader Nobita, the protagonist of the story. In a typical chapter, Nobita comes home crying about a problem he faces in school and/or the local neighborhood. After hearing him out, Doraemon often offers helpful advice to his problem(s), but that's never enough for Nobita, who is consistently looking for the "quick, easy" way out (which offers insight to the viewers as to why Nobita's life turned out the way it did). Finally, after Nobita's pleading and/or goading, Doraemon produces a futuristic gadget out of his aforementioned pouch to help Nobita fix his problem, enact revenge, or flaunt to his friends.
Unfortunately when in possession of the gadget, Nobita usually gets into deeper trouble than before, despite Doraemon's best intentions and warnings. Sometimes, Nobita's friends (usually Suneo or Gian) steal Doraemon's gadgets and end up misusing them. However, by the end of the story, there is usually retribution to the characters who end up misusing them, and a moral is taught.

Doraemon: The cosmic cat protagonist of the series along with Nobita. It's a cat-like robot that comes from the XXII century, sent by the descendants of Nobita to help. He was born on September 3, 2112 [2] in a robot factory. During its construction was painted yellow and had ears, it really looked like a cat. Unfortunately, something went wrong during the construction of Doraemon and became a machine with low performance. The problem was a mechanical error by adjusting a screw, prevented the correct placement of a piece.

Nobi Nobita: The co-star of the series. Is lazy, clumsy and unlucky in life, besides being bad for the studios, is tormented by Takeshi Goda (also known as Giant) and Tsuneo. Doraemon always pays future inventions that were allegedly designed to solve serious problems, but Nobita just using them for their own enjoyment and the final plans do not go as he expects. Shizuka is in love and marry in the future. Strangely Nobita always interrupt Shizuka while she is bathing. Although Nobita is quite scary, in more than one episode has risked his life to help others or save a civilization.

Shizuka Minamoto: Is the girl Nobita likes. It's the only girl who appears as the main character in the anime. Not only is the love of Nobita, but is also in mind the other children, making it somewhat unlikely that in the future Nobita ends up marrying apparently lower in all respects to other suitors. It has a big heart, sensitive, responsible, tolerant, nothing spiteful and very good student, always getting the best grades. He also plays the piano and violin. 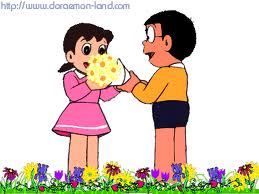 Takeshi Goda "Giant": The school bully. He and Tsuneo Nobita always annoying. She loves reading books and manga are very bad grades, but not as much as Nobita, and always getting into trouble. It is very rough and a bad singer (although he believes that his voice is extraordinary and requires children to listen to others sing). They call it Giant and has a younger sister named Jaik, which draws manga. Takeshi does not hesitate to help their friends when they are in trouble because the background is very good person.

Honekawa Tsuneo: It's a rich kid who likes to brag continually of their material possessions. It is also quite a liar and usually always agree with him to prevent it from Giant to hit it as it does with the other children. Almost always excludes Nobita when they go to a play activity.
Tamako Nobi (or Lady Nobi): Nobita's mother and is married to Nobisuke. He is 38 years. Nobita always send to the shop, order the room, do homework, etc.. It has very bad temper and scold your child cries when you suspend your exams (and especially if Nobita trying to hide that she did not see). However, it was not good girl student. He has a younger brother named Tamao.


1. WHEN YOU ARE CHILDREN YOU WATCH DORAEMON?
2. WHICH ARE YOUR FAVORITE CHARACTER AND WHY?
3.WOULD YOU LIKE TO HAVE A FRIEND LIKE DORAEMON AND WHY?
GOOD BYE